Angela is a professional artist and educator with a career spanning more than thirty years. She has always drawn, made sculpture and jewellery as a mode of self expression. Her work is self-referencing, never far from the organic and involves a process of constant refinement.

The link between Angela as a jeweller and sculptor tends to be not only her ability to think in a multi-dimensional way but also her ability to deal with scale and form using a variety of media.

Built, designed and hosted by NISS 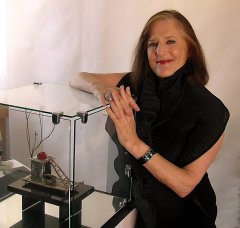